The Bat! v9.3.3 with further improvements

The new version of our email client has been released! The Bat! v9.3.3 comes up with a number of stability and usability refinements.

A new filter condition appeared in The Bat! v9.3.3: the "Tag List" condition is used to check whether emails have any tags assigned. Thus, the users can now quickly sort all emails with or without tags in the message list.

We have also improved the process of adding a contact to an address book group: now the groups can be sorted alphabetically, which is much more convenient.

A number of issues were fixed in the new version of The Bat! such as the error which appeared when using the "Date" condition in a block, saving of deleted shortcuts, the display of vertical scrollbar when replying to a long text in plain text editor and closing of POP3 connections when pressing the "Esc" key in the Mail Dispatcher. 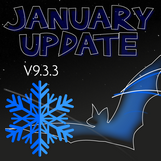