The Christmas Edition of The Bat! email client is released!


We know that all The Bat! users are looking forward to The Bat! v10 – we have planned to release it this autumn, however, the development takes more time than expected. Currently we are working hard on implementing new features in The Bat! v10 and must be sure that this new version will meet your expectations and perform flawlessly. The Bat! v10 will be released soon, you’ve got not much to wait. For now, The Bat! v9.5 Christmas Edition will create a pleasant festive mood to you!

Traditionally, the Christmas Edition displays a themed splash screen at program startup. We have improved certain program features and fixed some program errors in The Bat! v9.5.

The %SetEditor macro, which is used in the templates to set the desirable editor type, recognizes new values in The Bat! v9.5 Christmas Edition. It now uses the "plain", "text" and "HTML" values. The first two values set the Plain Text Editor, while the last one sets the HTML Editor.

This macro can be useful if, for example, you use Plain Text editor by default, but set an HTML template for one of the folders. In this case you can insert the %SetEditor="HTML" macro in the template: The Bat! will automatically use the HTML Editor when you create emails using this template.

In the new version we have found a better solution for mailsploit vulnerabilities so that the sender's name is properly displayed instead of the source code as it used to be since The Bat! v8.2.

The developers have fixed the error that caused some attachments to be hidden on the attachment pane. Such attachments were treated as HTML-parts of the email and were no displayed if the "Display HTML-related message parts" option was disabled. There are some improvements in the template editor as well: it is now possible to automatically switch from Plain Text to HTML format when using HTML formatting. For the detailed list of improvements in the current release please refer to the entire list of changes.

We wish you a Merry Christmas and a Happy New Year! 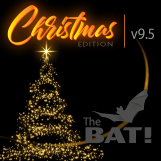