The Bat! v10.2 with RichText Editor and Gmail OAuth update

We continue to improve the functionality and increase the stability of the 10th version of The Bat! email client. Today we have released the long-awaited new version The Bat! v10.2!

The new version features the good old editor RichText, which was used to create HTML messages in The Bat! versions up to 9.4. We have refined its certain functions and added it as an option to set the default message editor in the „Options → Preferences → Viewer/Editor” menu. Now The Bat! users have a good choice – they can either use the new HTML editor, which allows editing HTML source code, insert images from remote sources and offers all standard functions of an HTML editor (it is now called PureHTML in The Bat!), or create HTML messages in the RichText editor, which does not offer all the functions of a standard HTML editor, but is stable and reliable.

We keep up the work on the new HTML editor and we have added a number of fixes in v10.2. One of the important improvements is the new crop dialogue where you can select the settings of the image wrapping, border styles and insert a hyperlink to the image.

Not only the editor, but also the viewer was improved in the new version: we have updated the CEF version, which means that the HTML-messages will be displayed even better.

Important notice for the users of Gmail accounts. Starting with October 3, 2022 Google will block all third-party applications which are using the OAuth out-of-band (OOB) flow, including The Bat! This means that all The Bat! versions prior to the new v10.2 will not be able to authenticate in the dedicated popup window in order to get permissions to send and receive mail in the new accounts or in the accounts which require renewed permissions. The new The Bat! v10.2 performs this authentication via the localhost Redirect URI as it is now required by Google. So, after the update to the latest The Bat! version it will be possible to authenticate in Gmail accounts and get the needed permissions.

The email client The Bat! is meant to make the email management easy and effective and with each new version we strive to make it even better and are thankful to all the users for the trust and the incredible support!

For the detailed list of the improvements in the current release please refer to the entire list of changes. 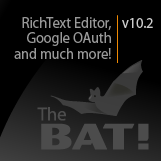