The Bat! v7: Keep Your Address Book Connected with Your Smartphone

More than just Email: The New Protocol to Work with Exchange Servers

The EWS protocol allows connecting to MS Exchange Server 2007 and later versions directly, with no need for extra applications as is the case with MAPI. With the EWS protocol support, users can download email and other Exchange items such as calendar events, contacts, tasks and notes, and store them in local folders, thereby making it possible to access them offline.

Users who deal with numerous contacts, across multiple devices, will appreciate the new address book synchronization feature in The Bat! v7. The CardDAV technology allows syncing The Bat!’s address book contacts with Google and iCloud contacts, as well as with other servers which support this protocol. All the changes that a user makes in his address book in The Bat!, are updated on the server, and vice versa.

Creating Accounts in One Step

In The Bat! v7 the developers improved upon the process of creating new accounts. The new wizard offers the auto-configuration option that allows The Bat! to quickly find the needed settings for all popular mail services. Users can now create a new account in just one step: They need to input their name, email address and password and click “Finish”.

The Bat! v7 offers further improvements for stability as well. Check out the entire list of changes in The Bat! v7.

Please refer to the user guide on setting up an EWS account in The Bat! and the general information on the EWS protocol. 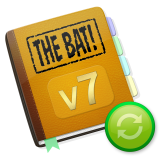